Ahead of this weekend’s Emirates FA Cup Second Qualifying Round game at home to Cheshunt, we look back at five previous Stones games at this stage of the competition.

Our last outing in the second qualifying round was back in 2015. The tie, which included a Matt Bodkin (pictured below) hat trick, was not all plain sailing; after Jay May opened proceedings, the away side then scored twice in three minutes to take the lead as half time approached.

Bodkin equalised before the break, and that proved to be the catalyst for a second period which saw the Stones run riot, scoring four unanswered goals through Bodkin (2), Joe Healy and Alex Akrofi.

This second qualifying round tie was our third game of the 12-13 FA Cup campaign, having overcome Colliers Wood United in the preliminary round and Chipstead in the first qualifying round.

Much like the South Park game some three years later, the big scoreline again doesn’t tell the whole story, with all five of Maidstone’s goals coming in the final quarter of the game in Essex.

The 2008-09 season provided our best post-reformation FA Cup run at the time, with Isthmian Premier Division Stones eventually falling in the fourth qualifying round at home to AFC Wimbledon, a game that was played in front of a Bourne Park record crowd of 1,719.

After beating Tooting & Mitcham United in the first qualifying round, Maidstone welcomed Conference South outfit Fisher to our then home at Sittingbourne.

Stones legend Nathan Paul opened the scoring in front of 389 spectators, and, after conceding a first half equaliser, striker James Pinnock gave us the lead for a second time midway through the second half. The away side levelled things again on 86 minutes, but a stoppage time goal from centre back Ben Lewis – headed past a young Chris Lewington in goal for the South Londoners – ensured our passage into the third qualifying round and a tie away at Halesowen – a game generally considered as one of the best of the ‘wilderness years’.

One of the all-time iconic afternoons of the Bourne Park days saw Kent League Maidstone overcome a Redbridge side sitting three levels above them in the footballing pyramid.

Trailing 1-0 at the break, a resurgent second half Stones performance saw Simon Austin – now manager of our under 23s – equalise after getting on the end of an Aaron Lacy long throw at the second time of asking.

With two minutes remaining Austin then sent Bourne Park into hysterics, capitalising on a botched overhead clearance to secure a win which at the time was widely regarded as the club’s best post-reformation result. 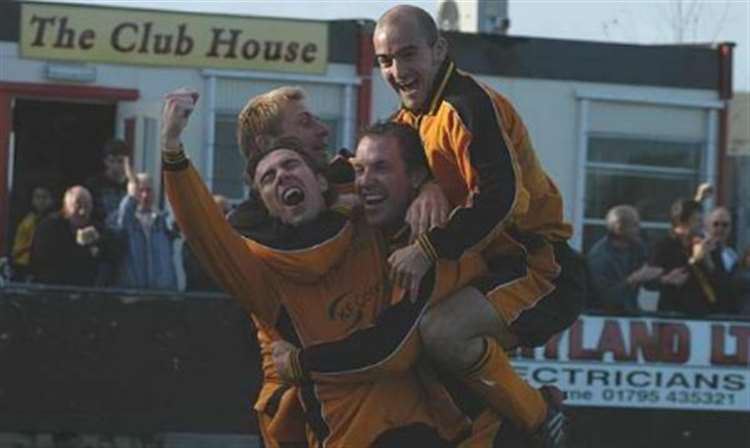 A bit of creative license is required here, as the story of the 2002-03 season in the FA Cup is not in this second qualifying round game, but in each and every tie that came before it.

The 2002-03 campaign was the first time the club were allowed to compete in the competition since 1991; entering at the extra preliminary round stage, Maidstone, followed by BBC cameras for a Football Focus feature, were drawn away to Ramsgate in a game that was also shown live on the red button.

In front of a large and boisterous away following which made up the majority of a crowd of 728 at Southwood, the Stones secured a draw thanks to a Jamie Kempster goal.

Legendary centre back Paul Foley got the only goal in the replay, setting up a mouth-watering preliminary round tie away at Tonbridge Angels, then of the Southern League East Division. In one of the all-time great Maidstone games, another Stones legend in the shape of 40-year-old Steve Butler scored a remarkable hat trick as the Angels were felled by three goals to two at Longmead.

The first qualifying round tie was an away-day for the ages, with a 300+ strong black and amber crowd travelling by ferry to support the Stones on the Isle of White against Newport (IW). Maidstone were rampant in a game that finished 4-0 thanks to a goal from Adrian Webster and a hat trick from Steve Marshall.

Sadly, Boreham Wood, then of the Isthmian Premier Division – two leagues above Maidstone – proved to be a step too far in the second qualifying round. A then-record crowd of 937 saw goals from Paul Ribbens and Steve Butler, but the Stones had little answer as the Wood knocked five past goalkeeper Kevin Hudson.

As it’s a cup fixture, season tickets are not valid.