Maidstone United put the disappointment of their FA Cup exit in mid week firmly behind them with a comfortable victory over Hemel Hempstead Town.

Three goals inside five first half minutes gave the Stones the platform for the win with debutant Joan Luque involved in the build up to two of the goals before he scored the third. Luque had enjoyed a good pre-season with the Stones before moving to the club this week and he couldn’t have asked for a better debut with an eye catching performance in midfield.

The game was relatively evenly matched until the 23rd minute. Luque played the ball inside to George Porter who chipped a delightful cross towards the back post and the arriving Sam Corne volleyed the ball past Dean Snedker.

Within seconds the Stones had added a second. Once again Joan Luque was involved as this time he picked out Raphe Brown who had charged into the area and Brown managed to squeeze the ball through Ryan Kinnane’s legs and into the net.

And Hemel’s afternoon was to get even worse on 28 minutes. The Tudors had a free-kick charged down in midfield and George Porter’s flicked header went to the excellent Justin Amaluzor. Amaluzor still had much to do but he managed to make room to stand the ball up for Luque who steered the ball inside the left post.

Maidstone then came close to adding a fourth moments later as Hemel struggled to recover from the sudden battering. Amuluzor did well down the right and he pulled the ball back to Luque whose rising effort was tipped over the bar by Snedker.

Early in the second half, Luque went close again. This time his shot from out on the left was heading for the right side of the net until Snedker made a decent low save.

It wasn’t until 53 minutes had been played that Chris Lewington was finally called into action. A corner from Ryan Sellers threatened to creep in until Lewington got it away from the line. Then Matt Bateman played the ball forward to Sadik Balarabe who showed strength to get into a shooting position but he was denied by Lewington. And the resulting corner from Sellers also went close with Lewington once again having to make a save.

After this brief flurry from Hemel, Maidstone soon began to look the more likely side to score again and they had three opportunities to do so in close succession. The first came when good work from Amaluzor saw the Stones’ forward get in down the right and he drilled the ball across the six yard box where Scott Rendell was inches away from applying the finishing touch.

Luque then slipped the ball into George Porter who got a low shot away only for Snedker to get down well and make the stop. And not long after this, a mistake from Hemel following a free-kick allowed Dominic Odusanya to find Porter and Porter’s ball across the face of goal was met by Luque who put the chance wide.

With ten minutes remaining, Hemel pulled a goal back. Sadik Balarabe did well to get a sight of goal as he got past Joe Ellul and he lashed in his second goal inside two games for the Tudors.

But any faint hopes that Hemel might have had of getting something from the game were dashed on 86 minutes. Substitute Ibrahaim Olutade had only been on the pitch for about a minute when he sent a low ball into the box where it bounced around and was fired in by substitute Noah Chesmain. 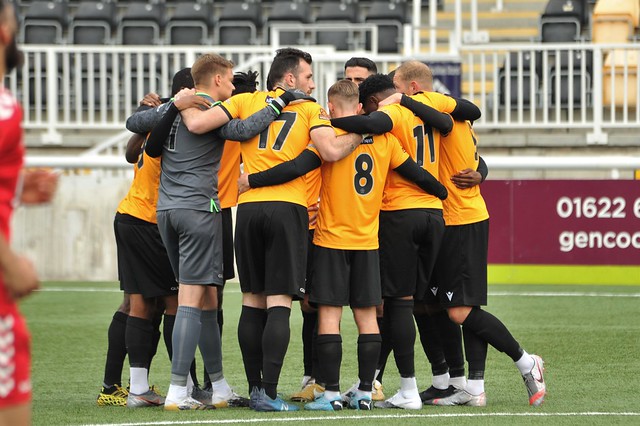