For the first time since 10th September, Maidstone United kept a clean sheet as they stretched their mini unbeaten run to three matches with a battling point away at Braintree Town.

In a drab first half, punctuated with 22 fouls, there was little in the way of goalmouth action but one of the rare moments came with 10 minutes gone. Jamie Coyle struggled to get across to Monty Patterson and he elected for an early shot which Lee Worgan booted away with his feet.

It wasn’t until after half an hour gone that Maidstone finally threatened. Alex Flisher hurled the ball into the box and Coyle got a touch on Kevin Lokko’s downwards header but the ball went wide. Then shortly after this, Flisher sent a cross into the box which was met by Lokko and he headed over the bar.

The last meaningful action of the first half came from the home side. Once again Patterson was the key player and this time he came inside Seth Nana-Twumasi before striking a low weak shot from the edge of the box which went straight at Worgan.

Just the break, Braintree could have opened the scoring. Former Maidstone player Reece Hall-Johnson delivered a free-kick into the box which was headed goalwards by Ian Gayle. Worgan managed to get a hand to the ball and it fell to Jack Midson who blazed the ball high and wide of the goal when well placed.

Delano Sam-Yorke then saw a shot from an awkward angle go all the way across goal before Tom Mills hit a good half volley from 25 yards which Sam Beasant saw late but he managed to push it wide. From the resultant corner, Reece Prestedge picked out Flisher and his header dropped just over the bar.

Then with 73 minutes gone, Jack Paxman rolled the ball into the path of Sam-Yorke. Yorke was out on the left hand side of the box and he tried to lift the ball over Beasant only to see his effort fall onto the roof of the net.

Moments later it looked as though Braintree had edged into the lead. Hall-Johnson got in down the right and he hit a hard shot which Worgan did well to get a hand to. The ball squirmed behind the Maidstone keeper and as he tried to get back, Midson was ruled to be in an offside position as he smashed the ball in from close range.

Late on, the Stones did peg Braintree back as they went in search of a winner. The Iron survived a scramble in the box and then the last chance fell to Flisher who had a low shot from the edge of the area but it didn’t trouble Beasant in the Iron goal and it went wide of the right hand post.

Who was your man of the match against Braintree Town? 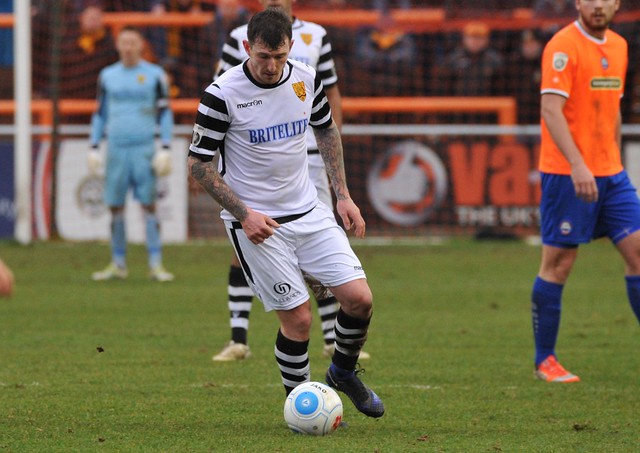