The Stones’ winless streak has now stretched to 13 matches in the National League as this time they were defeated by Gateshead.

In contrast to last week’s match against Eastleigh, Maidstone’s afternoon got off to a bad start. With just three minutes gone, a ball forward from Paddy McLaughlin went over the top to Lewis McNall and he easily went round Lee Worgan, who had come out of his box, before slotting into an unguarded net.

The Heed continued to dominate and they went close a couple more times. First of all, Scott Barrow’s effort from about 25 yards fizzed just over and then Ben Fox stabbed the ball goalwards from a position close to the edge of the box but it also cleared the bar.

As the half wore on though, the Stones started to find their feet and they drew level on 19 minutes. Jai Reason dinked the ball into the area to Stuart Lewis who was brought down by McLaughlin. It was Reason who assumed responsibility for the penalty and he sent Dan Hanford the wrong way from the spot.

Maidstone might then have gone in front not long after this. Good work down by the left by-line from Jamar Loza ended with Loza pulling the ball back to Reece Prestedge who was in space but he screwed his shot over the bar.

At the other end. Barrow cut past Seth Nana Twumasi and caught the ball well only for Worgan to make an equally fine save and tip it over. Then in first half stoppage time, Loza played the ball to Reason who found Delano Sam-Yorke and he made room for a low drive which he dragged just past the left post.

In the opening minute of the second half, Darius Osei made progress down the right. His ball into the box eventually came to Sam-Yorke who lifted the ball goalwards and Hanford made a comfortable diving save.

Barrow then ran down the left. He played the ball into McNall who had a similar opportunity to Prestedge in the first half and like Prestedge, he couldn’t hit the target when well placed.

Just before the hour, Lewis received possession. He passed to Loza who drove into the area and hit a low shot which clipped the right hand post as it was going wide.

Hanford then had to tip the ball over after Alex Wynter had got on the end of Prestedge’s corner and following this, Hanford denied Loza with a parried save. But Hanford blotted his copy book on 74 minutes when he clashed with Reason and Hanford was dismissed for violent conduct. After a considerable delay, during which time Gateshead brought on substitute keeper James Montgomery, Reason took the penalty and Montgomery made a decent save with his first touch.

And Maidstone were made to pay the ultimate penalty three minutes from time. Lewis tripped Danny Johnson just outside the area and Fox curled a delightful free-kick past Worgan to give Gateshead a their sixth league win at home this season.

Who was your man of the match against Gateshead? 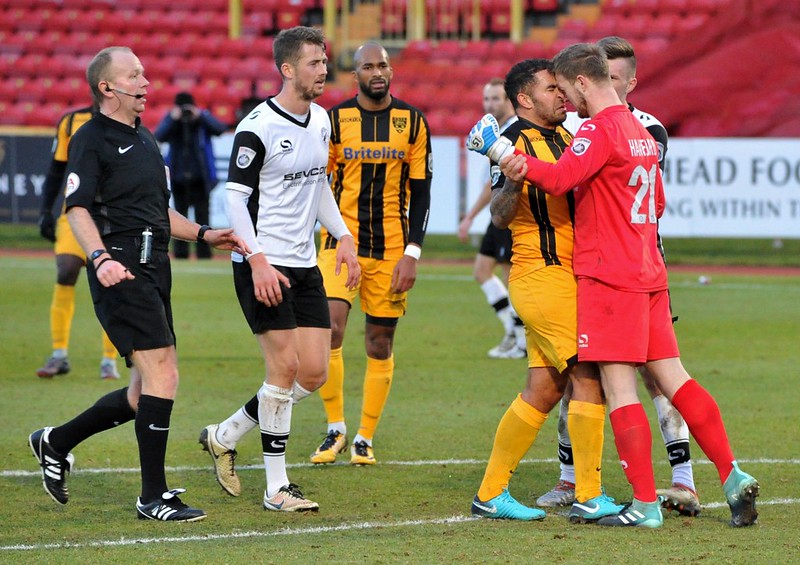